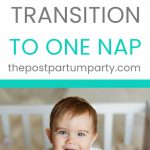 Sometime after your baby’s first birthday, he’ll be ready to transition to one nap.

Many parents are intimidated by the one nap transition, but I’m here to help you through it!

The good news about this transition is it’s the last major schedule change you’ll make! Your baby will likely stay on their same one-nap schedule until he is ready to drop the nap altogether.

Transitioning from 2 naps to 1 can be one of the trickier nap transitions. Instead of extending your baby’s wake time by 15 or 30 minutes, you’re stretching it to 2 or 3 hours, to get them on a new one year old schedule, which can be quite a stretch!

While many parents don’t love the idea of losing one of their baby’s naps, the one-nap schedule gives you more time and flexibility to get out of the house for adventures.

After you make the transition to one long nap, you’ll have the morning and afternoon free, giving you a nice break while baby sleeps in the middle of the day.

Most toddlers will still sleep the same amount of time during the day (around 2 to 3 hours). Instead of taking two shorter naps, they’ll consolidate their daytime sleep into one longer nap.

Learn all about when babies go from two naps to one and how to make the transition to one nap.

Make sure to give your baby and yourself grace during the transition period, because it can be a tricky one!

What Age do Babies Go From Two Naps to One?

Most babies are ready to transition from 2 naps to 1 nap between 13 to 18 months.

There is a 12-month sleep regression that can make you think your baby is ready to move to one nap sooner. Make sure you don’t confuse a sleep regression with the need to drop a nap and transition to a single nap prematurely.

If your 10 or 11-month old is struggling with naps or night sleep, it’s likely a sleep regression and not time to transition to one nap. Most sleep regressions work themselves out within two to six weeks.

How Do you Know When Baby is Ready for One Nap?

Wondering when is the best time to drop to one nap?

If your baby is between 13 and 18 months of age and showing these signs, then it’s time to transition to one nap with your baby! Don’t wait for the 18 month sleep regression to make the transition.

How Long Does it Take to Transition to One Nap?

The one-nap transition can be one of the trickier nap transitions, because if your baby doesn’t get enough sleep at their one nap, you don’t have any other daytime sleep to help make up for it.

It may take a couple of weeks of short naps for your baby to adjust to the one-nap schedule. When your baby is transitioning to one nap, it’s common for them to only nap an hour or so at first.

If your baby’s naps are too short after making the transition, it’s normal!

If you followed the guidance on when to transition to one nap, don’t go back to two naps at this point. It takes time for your baby to adjust to the new schedule and settle into one long midday nap.

You can do an earlier bedtime to help make up for the lost sleep or try to squeeze in a car nap or stroller ride nap in the afternoon to help prevent your baby from becoming overtired. You can also practice crib hour and see if your baby will fall back asleep!

How Do I Transition My Baby to One Nap A Day?

Okay, once you’ve decided it’s the right time to make the transition, here’s how to do it!

Here are three different ways to transition to one nap. Read through these and determine the best strategy for your family.

It can be a bit of shock going from being on 3 hours of awake time in between naps to 4 or 5 hours all of a sudden, so for some families it’s a good idea to go slow with this transition.

Continue using your nap routine to help cue to baby’s brain that it’s time for sleep.

This second nap will be more of a cat nap and only last about 30 to 45 minutes. You can make this a stroller nap or car ride nap to help during the transition.

Do this for three straight days.

After 3 days, push the morning nap back by another 30 minutes.

You’ll keep pushing the nap back every 3 days until the new nap time, ideally between 12 and 1 pm.

Until you reach the later nap time, you may have to offer a catnap in the later afternoon or an early bedtime to help your baby from getting overtired and avoid new night wakings.

Don’t be afraid to move bedtime up by 60 minutes if the afternoon nap didn’t happen or both naps were short.

This method works well for many families.

Put your baby down at their normal morning nap time and wake them up about 30 minutes later, giving them a shorter nap in the morning.

Put them down for their second nap at the usual time in the hopes that capping that first morning nap will help them take a longer second nap.

Another way to transition your child to one nap, is to find the new desired nap time and put your baby down at that time.

You may need to pull out some tricks to distract your baby in the morning to keep him from falling asleep sooner than you intended.

I always found that going outside helped my daughter. They may seem very tired initially, but they’ll get a bit of a second wind once they make it over their old wake time hump!

Bedtime can also be brought up with the cold turkey approach until your baby can meet the new wake windows without a meltdown.

In either approach when you transition to one nap, the nap may be short at first. It’s not uncommon for babies to take an hour nap at first and it may take your baby some time to consolidate his sleep and get a good 2 to 3 hour stretch with one nap.

If you’re having trouble getting your baby to extend their nap, after giving them some time to adapt on their own, you can use one of the sleep training methods.

Transition to One Nap At Daycare

If your toddler goes to daycare, they will usually handle the nap transition for you! I would recommend starting the transition on a weekend while you can work toward those later wake times and let daycare take it from there.

Kids often sleep better at daycare anyway, especially once they are on that one nap schedule!

Here’s a sample one nap schedule that you’ll stick to once you make the transition. At this point, don’t worry about wake windows. You’ll keep your baby’s nap the same time each day.

The beauty of the one nap schedule is that you are almost done with nap transitions! Your baby will stay on the one-nap schedule until it’s time for him to drop the nap completely and move to quiet time, usually around 3 or 4 years old.